The Right to Cross Borders: RHJ at the UN 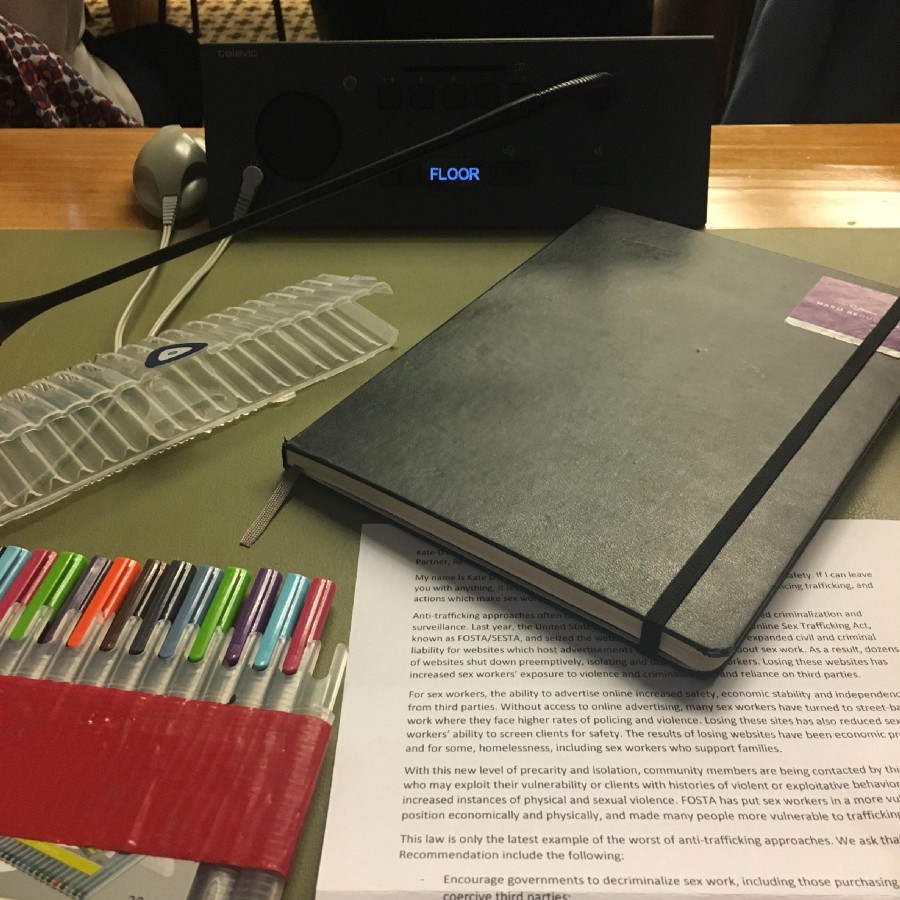 Two weeks ago, I had the honor and privilege of visiting the United Nations to talk about how the closure of online advertisers had made people who trade sex across the globe more susceptible to violence, victimization and ultimately — trafficking. (At the bottom of the page is RHJ’s oral statement.)

Last year the Committee responsible for the Convention on Elimination of all Forms of Discrimination Against Women (CEDAW) decided they wanted to write a General Recommendation (GR) on Trafficking in Women and Girls in the Context of Global Migration. To develop the GR, the Committee is holding regional meetings (thus far, meetings have included one in Thailand and one in Italy) to get input, as well as a General Day of Discussion — that’s where I was. The day was opened to country representatives, non-governmental organizations and advocates from around the world to give two-minute statements on what they wanted to Committee to include.

Trafficking and exploitation are increased when we restrict migration flows and make migrants more vulnerable. Women migrate for many reasons — economics, conflict, climate change, freedom — and their needs are support, information, and access to resources.

International fora are often a tricky space for U.S.-based folks — while the US pushes out its policies and globalist agenda to countries across the globe (see the TIP report, PEPFAR, the Global Gag Rule, the CIA), the government refuses to accept input or oversight from the international community. Policy makers often ignore studies based in other places and international bodies, like the International Labour Organization get little traction. It means that local organizers — who often are already dealing with policies based on the city, county, and state level — can feel light years away from a conversation in Geneva. In this case, the US has signed but not ratified CEDAW (and while the Republicans hold the Senate, it isn’t even worth bringing up).

That doesn’t mean we shouldn’t engage and find creative ways to use those opportunities. Almost ten years ago sex workers campaigned heavily during the Universal Periodic Review, the Human Rights Commission’s five-year review of the US’s human rights record, and these efforts elicited Recommendation 86. In New York City, there has been a years’ long push to ratify and hold to the CEDAW recommendations independent of the Federal government. And there is always a reason to show up for and support the incredible sex worker rights’ groups working across the globe who have been able to implement treaty recommendations successfully, with or without government support.

In the coming months, the process to contribute to the 2020 Universal Periodic Review will begin and it presents another opportunity for sex workers to shape the international process.

Good Morning. If I can leave you with anything, it is that actions that harm sex workers also harm those experiencing trafficking, and actions which make sex workers vulnerable, increase vulnerability to trafficking.

Anti-trafficking approaches often target sex workers broadly through increased criminalization and surveillance. Last year, the United States passed the Allow States to Fight Online Sex Trafficking Act, known as FOSTA/SESTA, ​and​ seized the website Backpage.com. This law expanded civil and criminal liability for websites which host advertisements for and information about sex work. As a result, dozens of websites shut down preemptively, isolating and displacing sex workers. Losing these websites has increased sex workers’ exposure to violence and criminalization, and reliance on third parties.

For sex workers, the ability to advertise online increased safety, economic stability, freedom of movement, and independence from third parties. Without access to online advertising, many sex workers have turned to street-based work where they face higher rates of policing and violence. Losing these sites has also reduced sex workers’ ability to screen clients for safety. The results of losing websites have been economic precarity and for some, homelessness, including sex workers who support families.

With this new level of precarity and isolation, community members are being contacted by third parties who may exploit their vulnerability​ or clients with histories of violent or exploitative behavior, and increased instances of physical and sexual violence. FOSTA has put sex workers in a more vulnerable position economically and physically, and made many people more vulnerable to trafficking.

This law is only the latest example of the worst of anti-trafficking approaches. We ask that the General Recommendation include the following:

- Encourage governments to decriminalize sex work, including those purchasing sex and non-coercive third parties. It is not possible to broadly and indiscriminately police the buyers of sexual services and not harm sex workers.

- Include measures to reduce the vulnerability of marginalized communities as a key trafficking prevention measure.

- Asses the collateral consequences of legislation and policing practices the evaluation of anti-trafficking strategy.