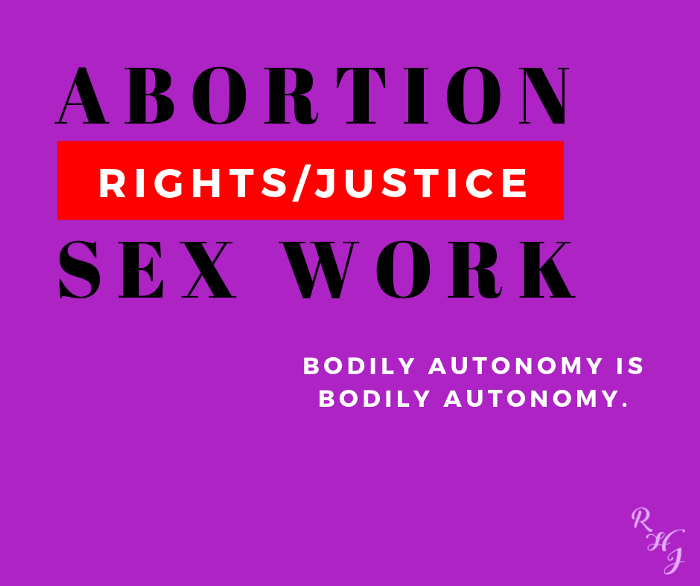 This month has been a tough one for anyone who cares about reproductive rights.

The pushback has been strong, and immediate. People are speaking up, in a variety of ways. Organizing rallies, fundraising for the groups already doing solid on the ground work to support people’s access to abortions, and above all talking. On Facebook and Twitter, in blog posts and opinion columns, people have had a lot of thoughts on why this is happening, how to tackle it, how to organize, who to reach out to. The wave of aggressively anti-abortion legislation in multiple states has been nothing short of a concerted attack on our lives. The spate of anti-abortion laws recently passed will affect a wide range of people, but there is no doubt that they will hit poor black and brown people the hardest. Unfortunately, these discourses are continuing to center white women’s narratives, and argue for abortion rights by centering moments of trauma.

It has become something of a trend in the past weeks to center discussions of the draconian abortion restrictions being passed on the fact that they will ban abortions even in cases of rape and incest — and, certainly, that is unconscionable. It strikes me, though, as telling that we so often feel we cannot argue for abortion rights without focusing on trauma. In some ways, I see this as a symptom of focusing too much on white women’s perspectives and catering to the sensibilities of white America. In many circles it isn’t polite, it isn’t done, it isn’t the right thing, to talk about the plain and simple fact that abortion is a routine medical procedure. Instead we need to flay ourselves open, expose our wounds in an attempt to prove we deserve to have access to it.

I don’t believe in allowing this shifting of discourse. It’s standard and common among many — largely white, largely middle and upper class liberal circles — to make appeals in this way. When I am talking with my people, with other black and brown folk, queer and trans people, sex workers of color, the discussion tends to strike far more at the root of the matter.

Unfortunately, as with so many other areas, largely the only people talking about the ways that these issues affect sex workers are sex workers.

The abortion bans are terrible because people who don’t want to be pregnant should be able to end their pregnancies. We shouldn’t need traumatic stories to justify it, we shouldn’t need explanations rooted in horror. Among sex workers, this is an extremely common experience already. So often, we are expected to justify our jobs and our existence with stories of trauma and misery in order to legitimize why we deserve rights. Why we deserve autonomy. Why we deserve to live free of criminalization. There is clear overlap between the criminalization of sex workers and the criminalization of abortion: in both cases, society wishes to penalize people for having sex outside of proscribed boundaries.

We need to speak out to make sure that the fundamental message is centered. We need to engage to bring the conversation back to the ideas of autonomy and freedom rather than falling into a pattern of making concessions that appeal to allegedly pivotal voting groups. Throwing sex workers under the bus in a bid to save those perceived as less transgressive will not produce a just world — indeed, it is not likely to succeed at all.

In so many ways, we are already overpoliced, exposed to increased risk of violence through the process of criminalization. We are already forced daily to justify our right to bodily autonomy by both the carceral system and our supposed allies who present a united front in treating us as though trading sex renders our consent meaningless. There’s so much overlap already in the issues that we fight for daily — and yet I so often see people who are the fiercest advocates for reproductive rights reproduce the same rhetoric that stigmatizes and perpetuates violence against sex workers.

Or — I can imagine these things, but only if we start seeing an intentional commitment in the reproductive rights movement to including the voices of sex workers. The fight for sex worker rights is so deeply entwined with the fight for bodily autonomy. Sex workers have long been at the forefront of fights for health justice; have led conversation on sexual boundaries and consent. We have been strong advocates for access to safer sex education. All of these things are intimately connected to the fight for reproductive justice — the fight to be able to have the tools and safety to make our own choices about our own bodies. Leaving sex workers out of the conversation is not just an oversight but actively harmful.