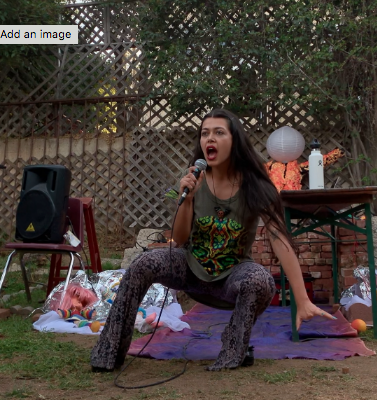 We’re so excited to introduce one of the two newest members of our collective — Paula Kahn! Paula works at the intersections of migrant and environmental justice, indigenous rights, the war on drugs, sex worker advocacy, and prison abolition . Paula studies and designs frameworks for historical memory, accountability, and overall conflict transformation.

One of the most treasured memories my late mami left me with is her chanting and clapping a mantra to me, coated in her divine accent, “Paulita- ju gotta improvise! Improvise!” This teaching has shaped my activism for the past six years as I’ve used deliberate social experimentation and evaluation as a response to the social conditions consciously designed and subconsciously mimicked and normalized- which attack the survival of myself and others.

At age twenty, introducing consent and anti-oppression pedagogy to a cooperative of 124 residents wasn’t a choice- it was imperative to visibilize and address the normalized inequitable power dynamics my peers and I were living under. While I was met with some resistance by residents adverse to recognizing the ways in which privilege, entitlement, and microaggressions dominated our collective space, other housemates who shared marginalized identities and experiences felt relief and validation for much needed conversations to be addressed pro-actively, aloud, in community. Others experienced a perspective shift and new responsibility to self-educate and prevent behaviors that reproduce the dynamics of racialized and gendered hierarchies. After four semesters of providing these workshops within my co-op, I was invited to provide another cooperative with anti-oppression training. During that timeframe, consent education became mandatory in student co-ops, fraternities, and sororities on UC Berkeley’s campus.

In retrospect, I crafted these workshops as a method of survival- to break the silence on the normalized conditions that had long before intoxicated my younger spirit with social anxiety and depression in middle and high school, where I was bullied, othered, and assaulted by strangers and “friends” who didn’t have access to the education we all desperately needed. I customized consent and anti-oppression pedagogy for my community out of necessity for the preteen, teenager, college student, family and ancestral experiences, simultaneously embodied within me. I wasn’t and am not alone- everyone needs technologies of collective liberation to survive the social anxiety that institutions of higher learning trigger in general- especially those who belong to historically terrorized ethnic and social groups who have been excluded from the means of knowledge production until recently.

Six years later, I understand how consent is a lens, a virtue, and the nucleus for preventing genocide, mass atrocities, and environmental injustice. Joining RHJ feels like I’ve arrived at a laboratory of social research, driven by the goal to reframe health and justice, which is further explained by co-founder Magali: “to reframe is to release old ideologies.”

Since my undergraduate studies, I have designed trainings for migrant justice and anti-war non-profits on historical memory, cultural competency, and “decolonizing organizing.” I have supported non-profits in adopting an intersectional framework for building a coalition to advance the shared goal of collective liberation. 20th century movements failed to prevent the continuation of colonialism and slavery because the commitment to heal historical planetary traumas that sustain racial and gender injustice, homophobia, transphobia, Islamophobia, xenophobia, and violence towards bodies that deviate from arbitrary norms was weak. The prioritization of healing intergenerational, collective trauma was weak! As a millennial, I lament that when 20th century movements fell apart, many whom held the most privileges in the social (dis)order gave up on them and assimilated into the status quo, turned their backs on liberation movements, and adopted an individualistic approach to survival. We are now in an era in which we cannot afford escapism- we must labor to decolonize. We must stop reproducing conditions of extraction and exploitation of the earth and each other if we wish to be good ancestors for the next seven generations. That can only happen when those who belong to historically advantaged groups, due to legacies of injustice, listen to those living under the most violence and oppression in the world and act in solidarity.

Releasing old ideologies requires us to reckon with historical transgressions that have undeniably impacted the course of our shared history and present. When my work supports others in realizing that these tragic histories of institutionalized violence shape their work, living, organizational and relational dynamics- and inspires them to reconsider, reevaluate, reorganize, and recommit the way they relate to others who are less free due to historical legacies- I am reinvigorated to stay fearless, compassionate, and continue visibilizing that which goes unnoticed by some, sits heavy in the hearts/throats/stomaches of others, making it challenging to name aloud.

“Speak! Even if your voice shakes!” is a piece of advice that was engraved into a school desk in the lecture hall where I attended my “Drugs and the Brain” lectures and is now spray painted in the common room of my university cooperative. May we all speak to advocate for just health policy, historical reparations, tolerance, and collective liberation-even when our voice shakes.